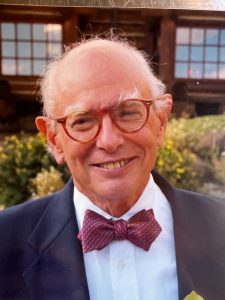 Peter Paul Nitze, a paragon of decency, generosity, and grace whose kind heart, keen intellect, unassuming wisdom, and joyful sparkle put him at the center of a broad universe of family, friends, and colleagues, young and old, died on October 30, 2022, with his wife of 51 years, Susan Nitze, by his side.  He was 87 years old.

He died at rest, peacefully, as a result of complications from aspiration pneumonia.

To be with Peter, in conversation or even silence, was to feel reassured and uplifted.  People who met him only briefly would remark on the feeling of having been seen and understood; those who were fortunate enough to know Peter were changed by knowing him. In his clear and quiet way, he helped people to feel happier, or less sad, or more hopeful. Encouraged. Inspired.  Accepted. He loved children, and they sensed it immediately. Grandchildren, great grandchildren, and even the children of strangers were drawn to him; something about the twinkle in his eye and his delight in mischief made them go to him, pick him out as an ally or refuge. The little ones would invariably climb into his lap.

People turned to Peter, throughout his life, for his wise counsel, friendship, and gentle good nature. Peter lived with infectious ebullience and curiosity, and with a sense of adventure. He loved good food and good wine and good conversation. He loved New York, his birthplace and lifelong home. He loved the Maine coast and being near the sea. He loved language and a well-placed word, whether spoken, in a book, from the stage, on the screen, or in a church, and was himself an eloquent and gifted wordsmith. He loved tradition, but also irreverence and satire and the unconventional. He loved his work – the business he built with his dear friend and co-conspirator Frank Stagen. He loved his friends and his family. He loved music and dancing. He loved to travel, especially with Susan, his best friend and love, at the helm, pushing them to see and feel and experience more, together.

Peter was born in New York City on September 17, 1935, to Phyllis (Pratt) and Paul Henry Nitze, an expert on military power and defense policy who served in administrations of both parties, from Franklin D. Roosevelt through Ronald Reagan. He was the great grandson of Charles Pratt, a co-founder of Standard Oil and founder of the Pratt Institute in Brooklyn, New York, and grandson of Ruth Baker Pratt, the first woman elected to Congress from the State of New York.

Peter attended grade school in Washington D.C. following his parents’ move from New York at the start of Paul Nitze’s career in government in the early 1940s. Peter subsequently attended the Groton School, in Massachusetts, for high school, where, among other accomplishments, his joie de vivre and prankster’s gifts led to a record-setting accumulation of demerits and Saturday detentions, which he served with pride. Peter went on to graduate from Harvard College in 1957 and to receive a J.D. from Harvard Law School in 1960.

Following graduation from law school, Peter began his professional career as a tax attorney, joining the law firm of Shearman & Sterling as an associate in 1960 and becoming one of its youngest partners in 1968. No sooner had he achieved this significant professional milestone than he left the firm to embark on a bold entrepreneurial adventure that would anchor the rest of his professional life and give rise to a singular friendship with his partner Frank Stagen.  Together, Peter and Frank formed Nitze-Stagen, & Co., Inc., a private investment firm that, at first, offered investors little more than the young partners’ energy, creativity, vision, integrity, and promise. Over time, those qualities led to real success, through their combined experience and deep expertise in real estate investing, particularly in the areas of commercial office, industrial, and retail properties, and in the adaptive reuse of historic, often iconic, buildings.

Following the opening of a Nitze-Stagen office in Seattle in 1987, in a move that would become the firm’s defining investment, Peter and Frank in 1990 purchased a hulking old building there that no one else wanted — the cavernous, crumbling Sears store and warehouse on First Avenue South — and converted it into a vibrant retail, office, and storage complex. The investment, together with the formation of the first business improvement association, transformed the neighborhood, and today the building houses Starbucks’ global headquarters and bears the coffee giant’s name. The success of this investment validated Peter and Frank’s long-held view –a core value of their business to this day – that real estate investment can, and should, be a catalyst for improving communities. In addition to the Starbucks Center, Nitze-Stagen led the revitalization of a number of Seattle neighborhoods and historic buildings, including the Cadillac Hotel, Union Station, Merrill Place, and the Frye Museum.

Peter remained on the board of Nitze-Stagen, as Chairman, until his death, and was actively engaged in setting the strategic direction of the company, which continues to play a central role in the growth and transformation of Seattle. In his work, as in his personal life, Peter was generous, honest, and kind, and he treated partners, investors, employees, and all others with openness and respect.

In addition to running Nitze-Stagen with Frank, Peter served as a director of a number of private and public companies. He also was deeply engaged in charitable causes, including as a lifetime trustee and member of the finance committee at The Professional Children’s School; Trustee and Treasurer at CEC Arts Link International; Co-Chairman of the Advisory committee at The NYU Center for Global Affairs; and longtime supporter of the West Side YMCA and International Women’s Health Coalition. Peter also was the longest standing President of the board of the Dakota, where he was among the first people to buy a co-op unit in the 1960s as part of the successful effort to save the building from demolition, an early instance of his lifelong commitment to historic preservation.